Endurance racing is really taking off in Turkey. There are even rumours of a possible Presidential Cup in the offing. Since April 2013, horses belonging to Evliya Celebi team member Ercihan Dilari have distinguished themselves in competitions in Gebze (6-7 April) and Kayseri (18-19 May), winning and placing. Making regular expeditions is clearly ideal preparation for getting fit in order to star in endurance competitions! 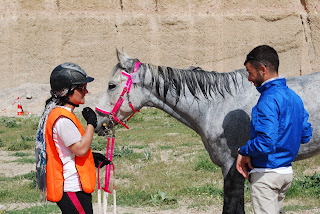 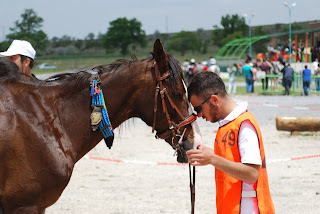 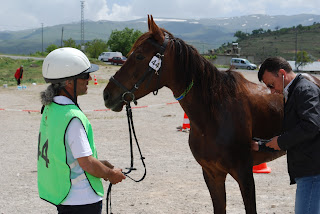 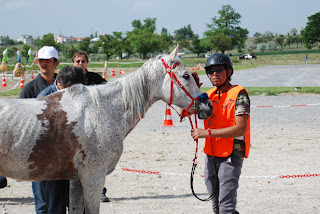 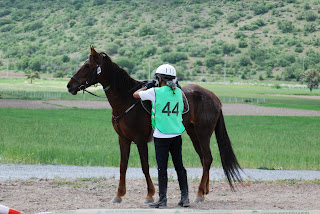 The winners of the 80 kilometre race at Kayseri were Anadolu, the mare who piloted the 2009 Evliya Celebi Ride and subsequent Great Anatolian Rides in 2010-2012, and Ercihan's son Bekir Dilari. Second was Zenobia (otherwise known as Browni), who made the 2011 Great Anatolian Ride, with Kemal Bey, and third Megin with Cristal Hanim, from Istanbul.

Layla, who began her expedition career in 2010 on the Great Anatolian Ride, and Erdinc Bey placed in the 40 kilometre.

Watch this space for further pictures and developments in Turkish endurance racing and Evliya expeditions!
Posted by Hoofprinting at 10:36 No comments:

The September ride on the EÇW came and went, and was as fabulous as ever.  Ercihan took us by new tracks, paralleling the 'official' route as written up in the guidebook—Evliya Çelebi Ways looks to be a better name than the singular Way.  Varying the route when repeating it annually on horseback adds interest for the regulars, though walkers with backpacks would doubtless prefer to keep to the known route; few, I am sure, would want to take detours for the sake of it.

At last, at last, after several months patiently waiting, I am delighted to report that the metropolitan municipality of Bursa is now putting up signposts along the Way.  This year we are concentrating on the section of the route in Bursa province, and will hope to continue in Kütahya etc next year.  The signposts are not intended to be as frequent as the waypoints that can be downloaded from the www.evliyacelebiway.com website, but indicate to the local people that the route is a reality, and because they are often located where the Way meets main roads, might inspire drivers to leave their cars for a while.  The route will not be marked with the red and white flashes on trails such as the Lycian Way, which was established before the era of GPS.  Instead, the guidebook, GPS waypoints, and signposts that indicate the distances between villages should be adequate to enable everyone to follow the route.

Once the signposts are up, we intend to visit the villages to try to arrange homestays, so that tents will not have to be carried, and can then produce some programmes for walking trips on the Way which tourism agencies will be able to sell.  We will also be going to the big tourism fair in Holland in February 2013.  Soon, we hope, some money should begin coming into the villages as travellers stay the night and eat there.  Bursa municipality is putting a lot of effort into making the Way well-known to the city folk too. The municipality will run the Turkish website, www.evliyacelebiyolu.com.

Tomorrow, 16 September, the fourth Great Anatolian Ride on the Evliya Çelebi Way will set out from  Hersek köyü on the southern shore of the Gulf of İzmit, and will end in Evliya's ancestral city of Kütahya.  Ercihan will take the lead as ever, with Susan close at hand.  This is the third Ride organised for equitourists, who will be partnered by Ercihan's fabulous horses from his Akhalteke Horse Center in Avanos.
Come and join us soon.  Remember, the Way is for walkers and bikers too, the waypoints can be downloaded from the website, and the guidebook is available in English and Turkish. Check out www.evliyacelebiway.com for details.
Posted by Hoofprinting at 02:04 No comments:


. . .       this was the one thing we could do to combat the exhausting tedium of this world;
because he had known this ever since those monotonous years of childhood and school, he had
never in his life considered withdrawing within four walls; that's why he had spent his whole life
travelling, searching for stories down roads that never came to an end.

This is how Orhan Pamuk describes Evliya Celebi in *The White Castle* [Beyaz Kale], published in 1990, translated by Victoria Holbrook.

Searching for stories down roads that unwind endlessly, stopping in remote places to listen and learn what people have to say: Evliya knew that there could no greater antidote to tedium than this. No room, however well stocked with learned tomes, could offer anything like the enlightenment that comes from travelling attentively.

Evliya liked motion for its own sake, especially the rhythmns of horseback travel -- an elevated view of the world, but also an immersive one, responsive to the need for water, food, relaxation, a roll on the grass after sweating, the flicker of a fire after sundown. Take to the road in search of beatitude, as Jack Kerouac did, but know that there are old ways, much older than the speed of cars, from which revelation comes.
Posted by Hoofprinting at 03:37 No comments:

Here are details of three recent articles on Evliya Çelebi and the Way. Unfortunately the first two cannot be read in full directly from the sites where published, but they will surely show up somewhere on google eventually. Or you may find hard copy of the magazines at the dentist... The third is immediately accessible.
'Back in the Saddle: The Spirit of Turkey's Greatest Adventurer Rides Again', an article by Pelin Turgut on riding the Evliya Çelebi Way, in Time magazine 23 January 2012, written when she accompanied a group of equitourists on the Great Anatolian Ride in September 2011:
http://www.time.com/time/magazine/article/0,9171,2104216,00.html
'Evliya Çelebi: Traveller's Tales', an article by Caroline Finkel giving background information about Evliya's life and work, in the British popular history magazine, History Today, November 2011:
http://www.historytoday.com/caroline-finkel/evliya-çelebi-travellers-tales
'Doing it the Evliya Çelebi Way', an article by Andrew Finkel on the Evliya Çelebi Way, in International Herald Tribune Latitude blog, 13 December 2011:
http://latitude.blogs.nytimes.com/?s=evliya
Posted by Hoofprinting at 23:15 No comments: 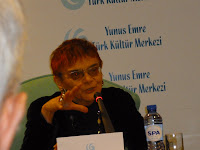 Posted by Hoofprinting at 07:25 No comments: